I have decided to change my approach: Writing the post before shooting the third "PinePhone as a daily driver" video. This week is going to be about Flatpak, Reading apps and the intricacies of running (non-)Flatpak Qt and GTK apps on the respective "other side". Part 2: Reading apps and Email.

Caveat: For the past week I have been struggling with receiving calls on Phosh/ModemManager based distributions, approximately since the massive improvements in battery life due to new Crust firmware. I found another user suffering from this issue, but assuming my tweets are being read among PinePhone users, it does not seem to be a widespread problem. I am continuing with this series despite of these issues, but be aware that core functionality might be currently not available.

I know, reading apps may not be the most pressing issue for a phone. But given the size of the PinePhones display, it can be quite good as a device that serves up text for the broadband interface of our human brains, the eyes.

Ever since I had that sidebar RSS plugin in Firefox way back when, I've been an RSS junkie.
I was very upset when Google sunset Google Reader1, but kept reading RSS feeds and eventually settled on Miniflux as a self-hosted solution. For a long time I did not find a Miniflux-compatible desktop RSS reader, but I became aware of one: It's called News Flash, is available on Flathub (also in Fedora and it can be built from the AUR) and supports the following services:

News Flash does not scale perfectly on the PinePhone in Phosh, but a scale-to-fit NewsFlashGTK on makes it fit in really well. It just works, although switching from article to article has been implemented via keyboard shortcuts only currently. While you can just use the virtual keyboard for that, it blocks quite a large area that could be used for displaying text. Still, I use it this way, because let's face it: Not every item of news is that interesting, and then there is always a feed or two that only deliver an excerpt anyway, forcing you into a browser to read the entirety of the article anyway.

Speaking of going through a ton of news items: Every now and then you will come across an article that is both interesting and too long to read in that situation. That's one of my uses of Wallabag, a self-hostable Read-it-later service (more popular, proprietary services include Instapaper and Pocket). Now, if you use Wallabag too, check out Read It Later, an app written in Rust that is fully libhandy enabled and works perfectly, even though it just has the basic features (e.g. it lacks tags). Read it Later is available on Flathub and in the AUR.

I have to admit that I rarely read an ebook on my phone, but I recall doing that before I had a dedicated device. On the PinePhone with Phosh, Foliate as a modern GTK based ebook reader is the obvious choice, and guess what: After a scale-to-fit com.github.johnfactotum.Foliate on it even works quite well. Even if you don't have any ebooks yet, Foliate has currently three integrated catalogs that help you at obtaining (DRM free) ebooks. Most of these are in the public domain, but that does not make them less interesting, as I have found that having books that are lengthy and heavy if they were printed on paper actually are easier to read when you can take them with you to many places. And thinking of a future in which the PinePhone can serve as a daily driver, don't you picture yourselves standing in a cue, reading Tolstoi? Foliates catalogue can be crashy, but the reader has been comparatively stable in my not too extensive testing and renders ebooks very well. Foliate is available in Flathub, in Arch Linux ARM and Fedora.

Getting an Email client to run and scale properly was hard on the Phosh based distributions for a long time. Geary, being the modern GNOME app it is, seemed to be the obvious choice for a long time. I eventually read that Evolution would work ok after adjusting it a bit, and that on postmarketOS, and given some adjustments it can be quite usable after a scale-to-fit evolution on, as long as you only use it with one mail account and don't have to many subfolders. You just have to disable all the sidebars and set the mail preview part to show up below the list of received mails. As Evolution supports GPG, you can use it for encrypted mail, too — I did not get around to trying this yet. Evolution is packaged in every Phosh based distribution I tried so far — and it is available on Flathub.

However, on the evening of writing this, I tried Mobian again, and guess what: Geary has been optimized and scales properly now. Why I could not setup a GMail account, a regular IMAP account of mine worked just fine. I am sure that other distributions will follow eventually. Geary is packaged in every distribution with Phosh I tried, too. It also is available on Flathub. 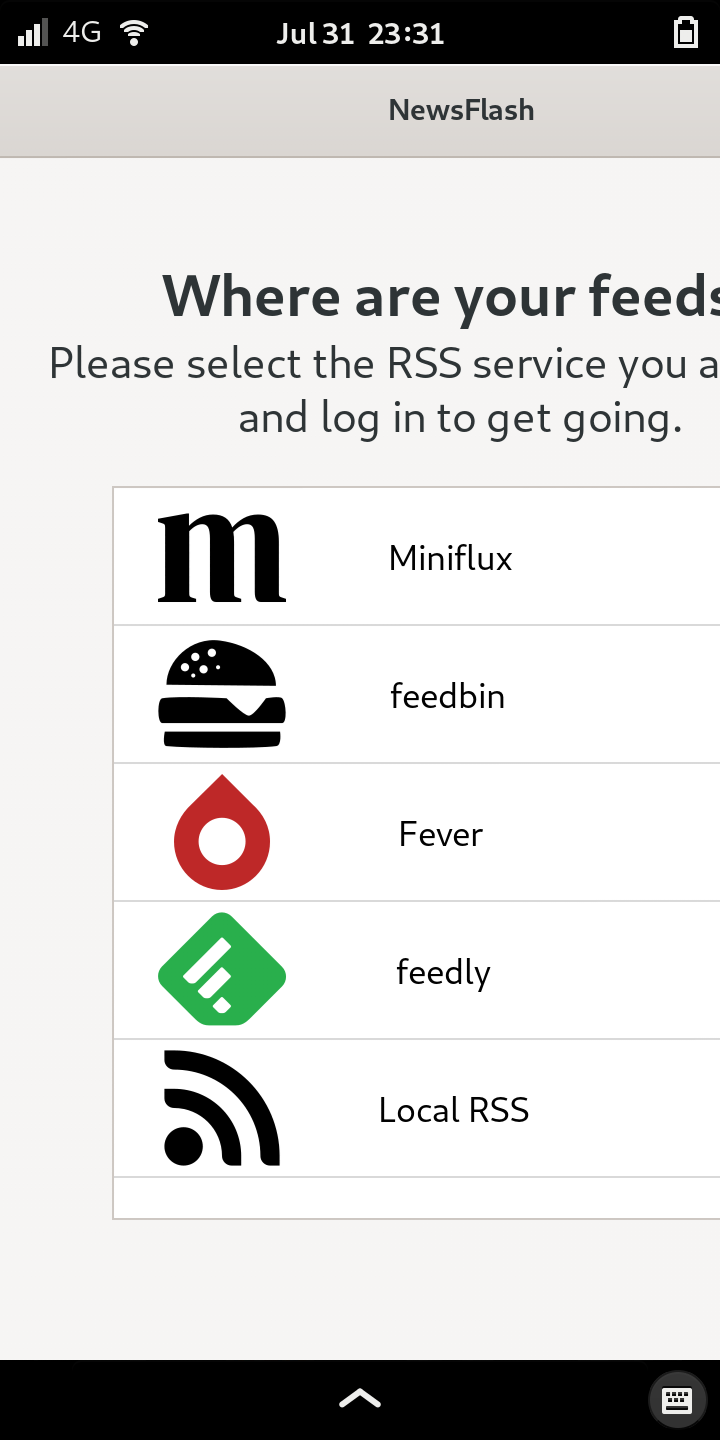 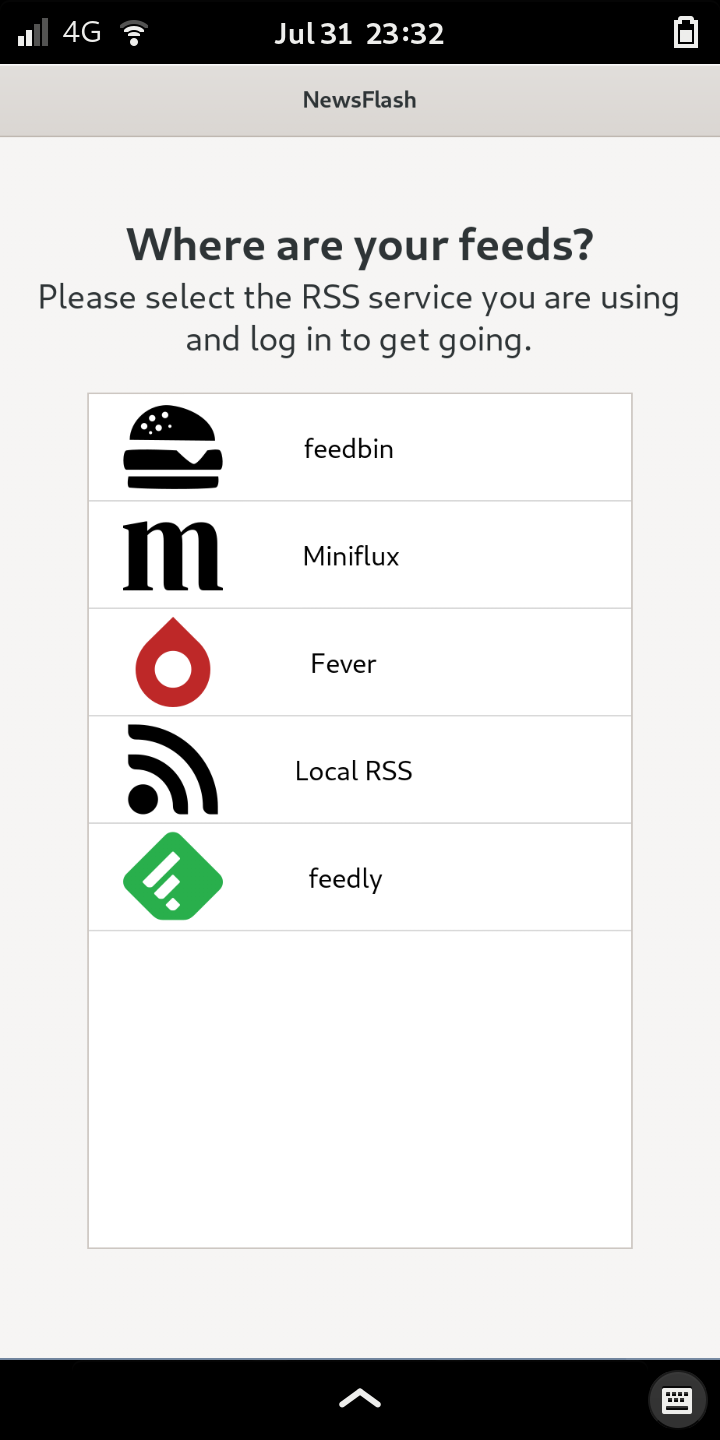 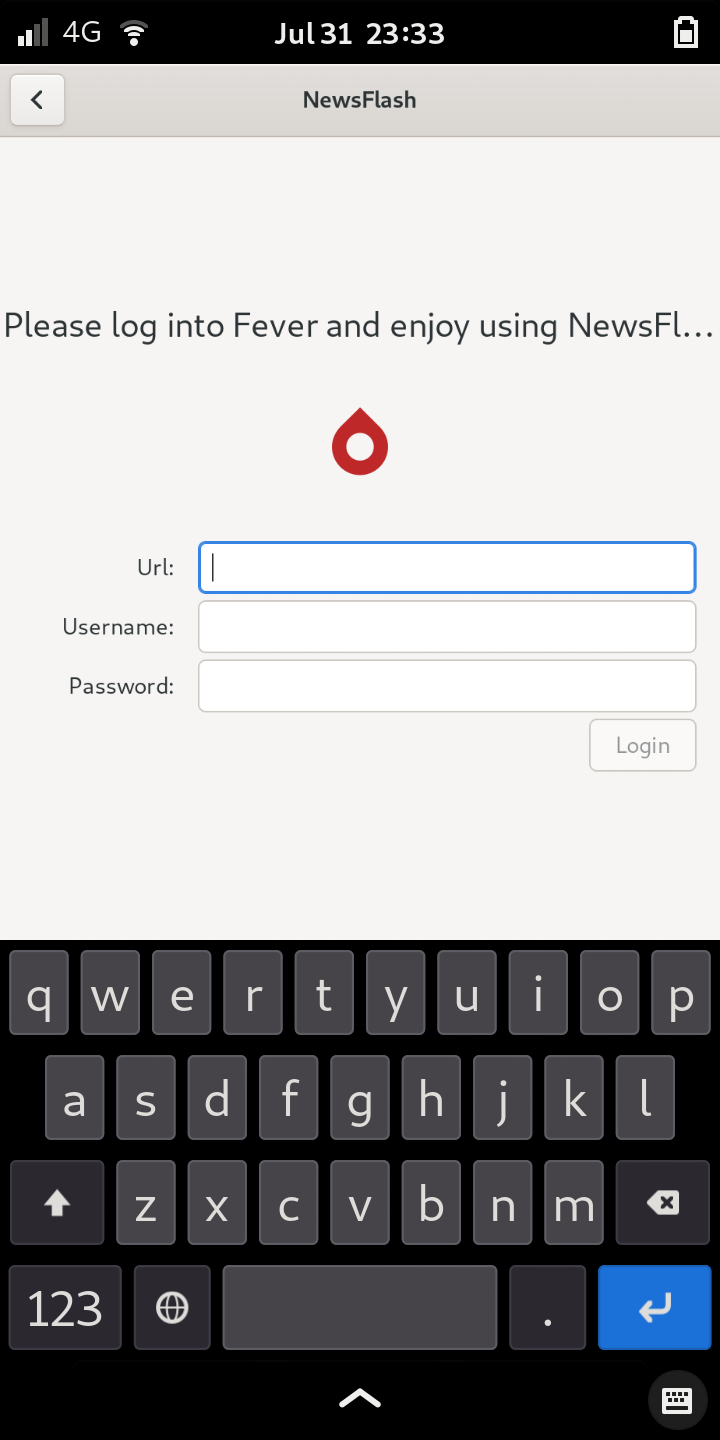 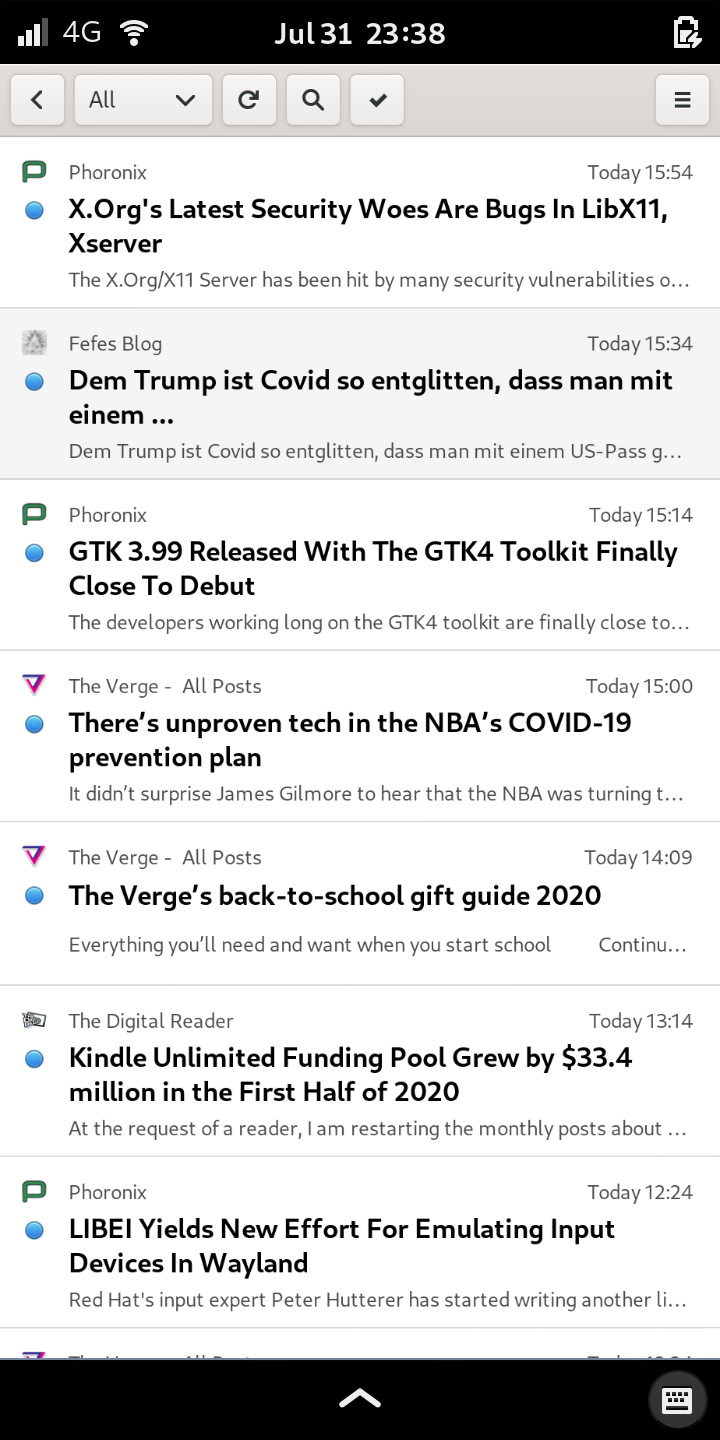 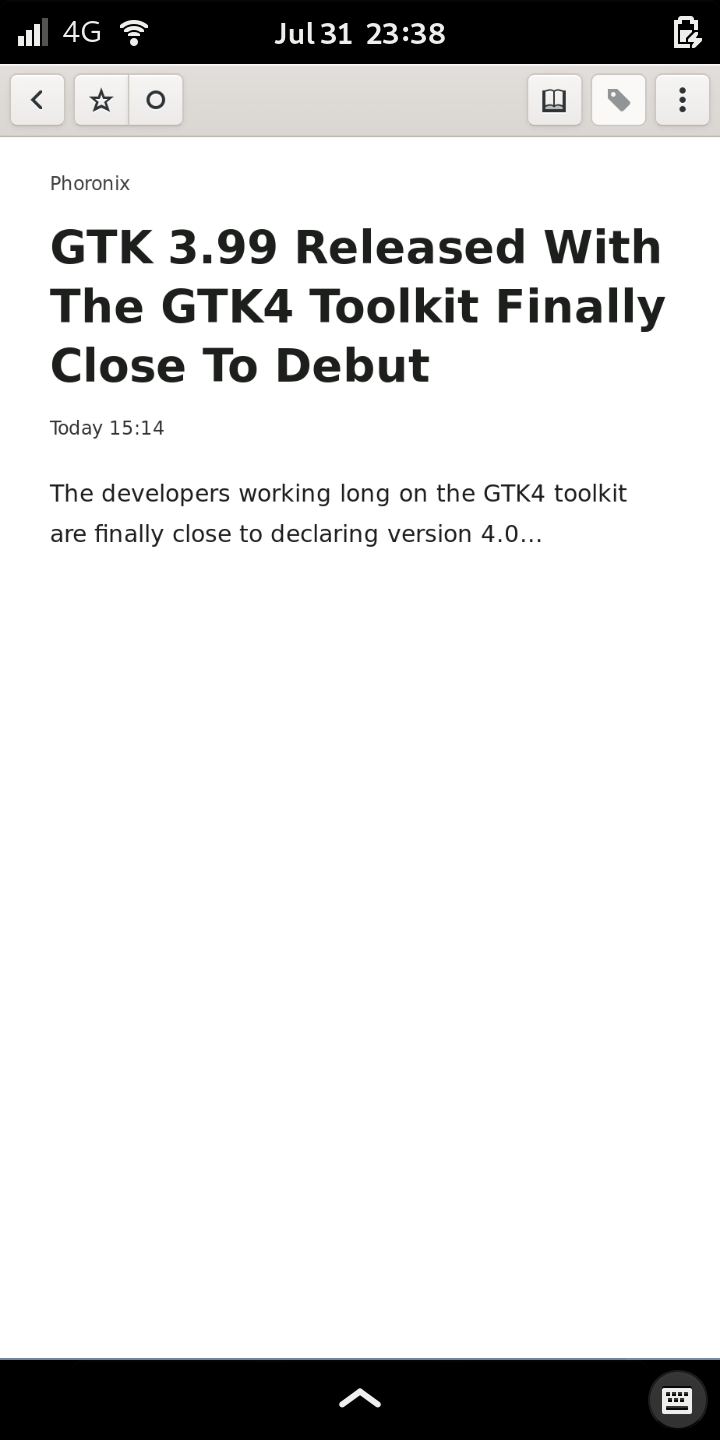 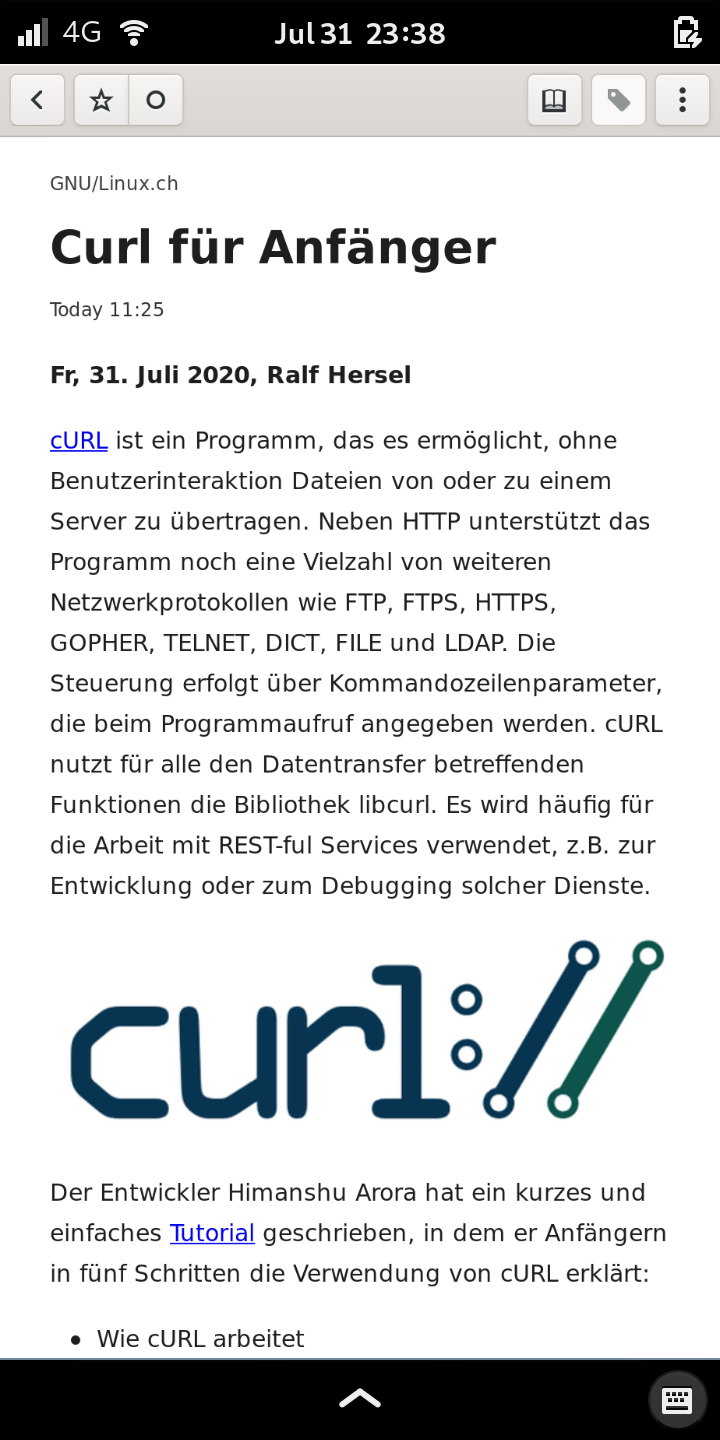 Read It Later: Start/sign up screen 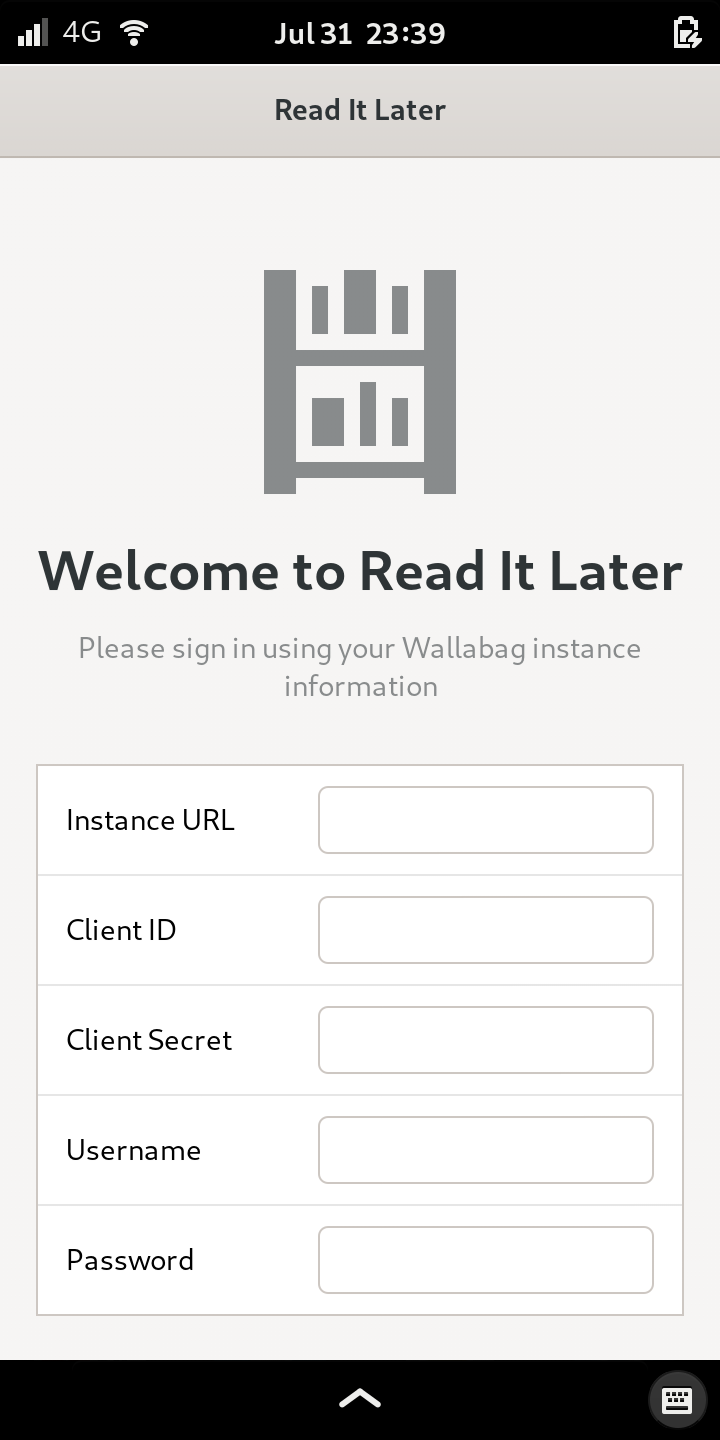 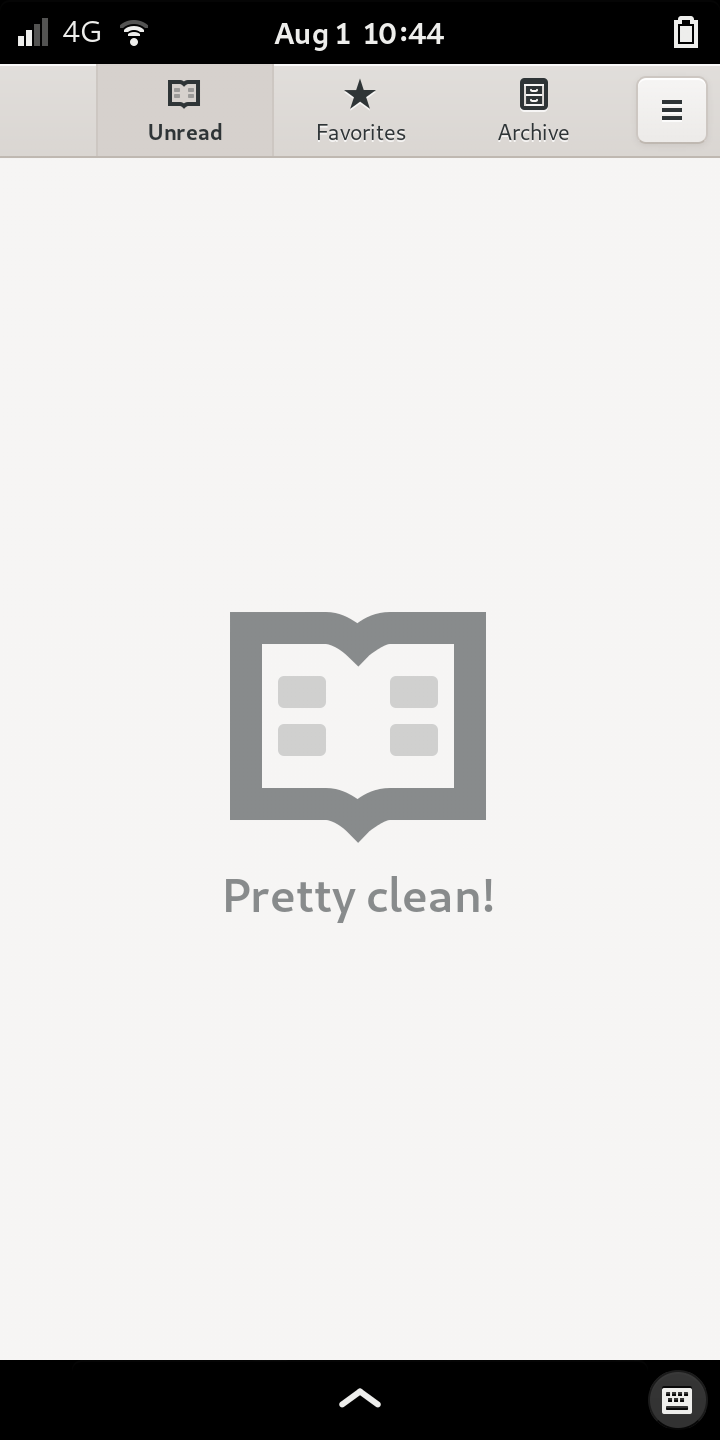 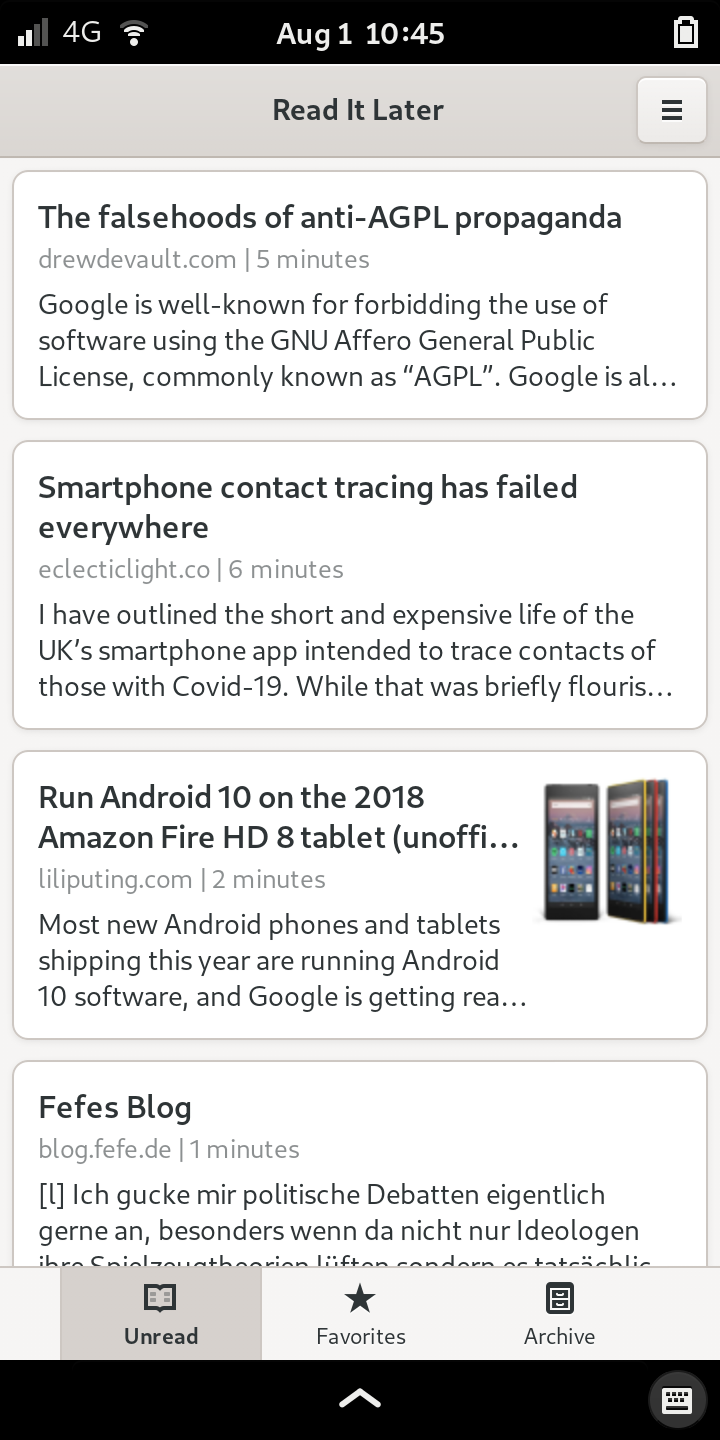 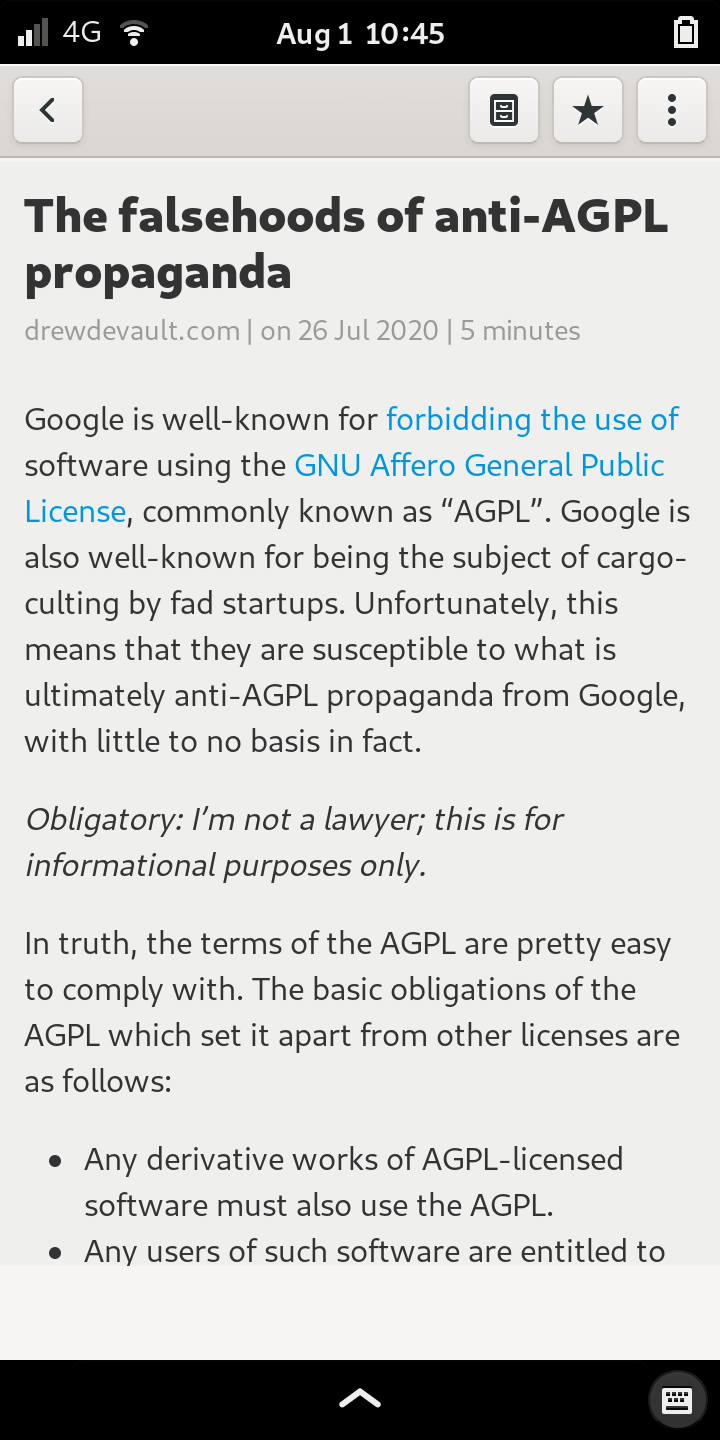 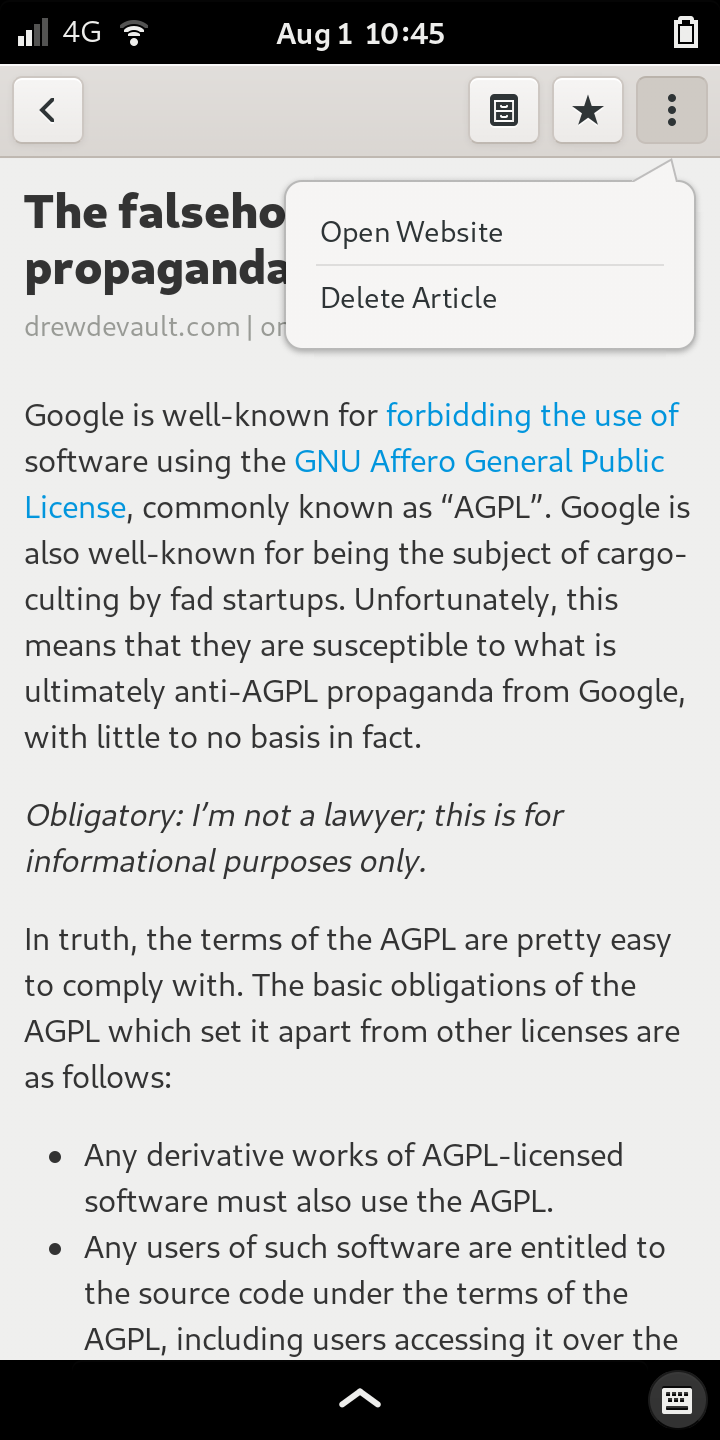 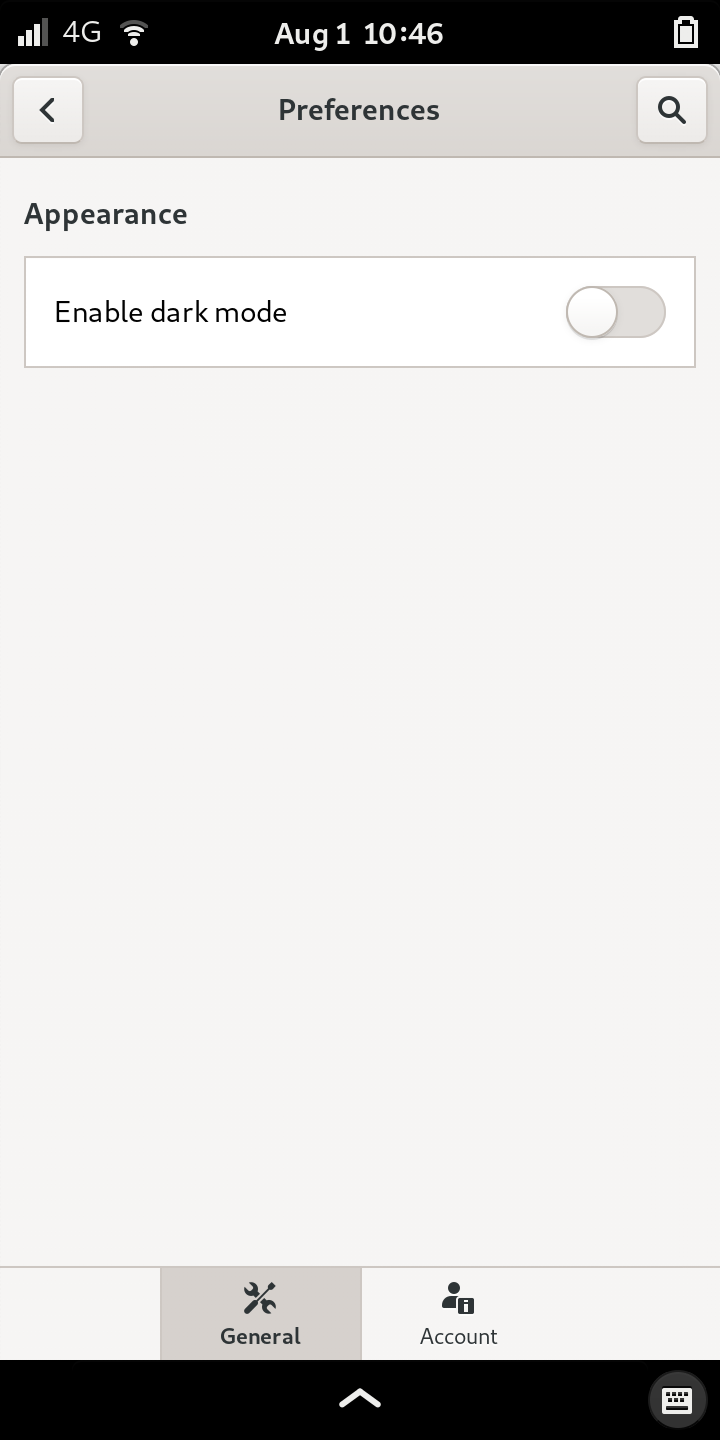 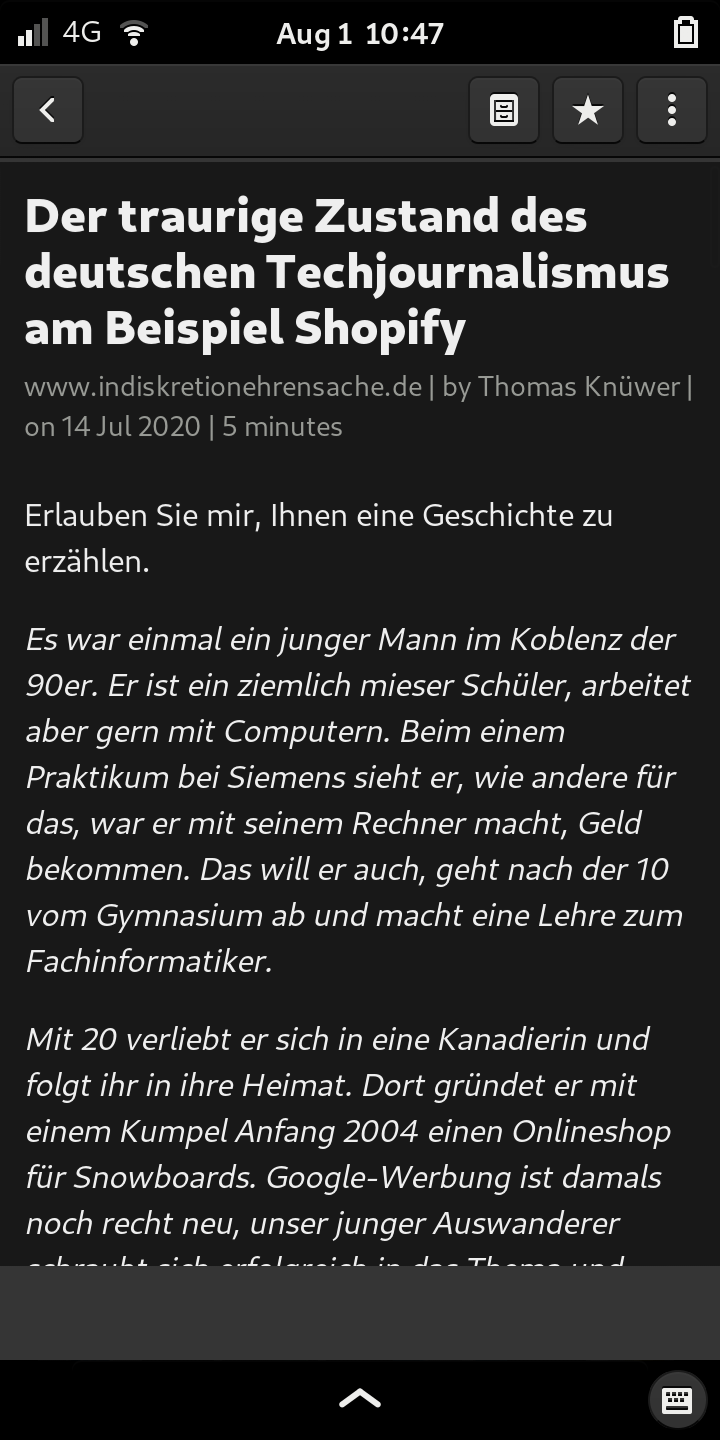 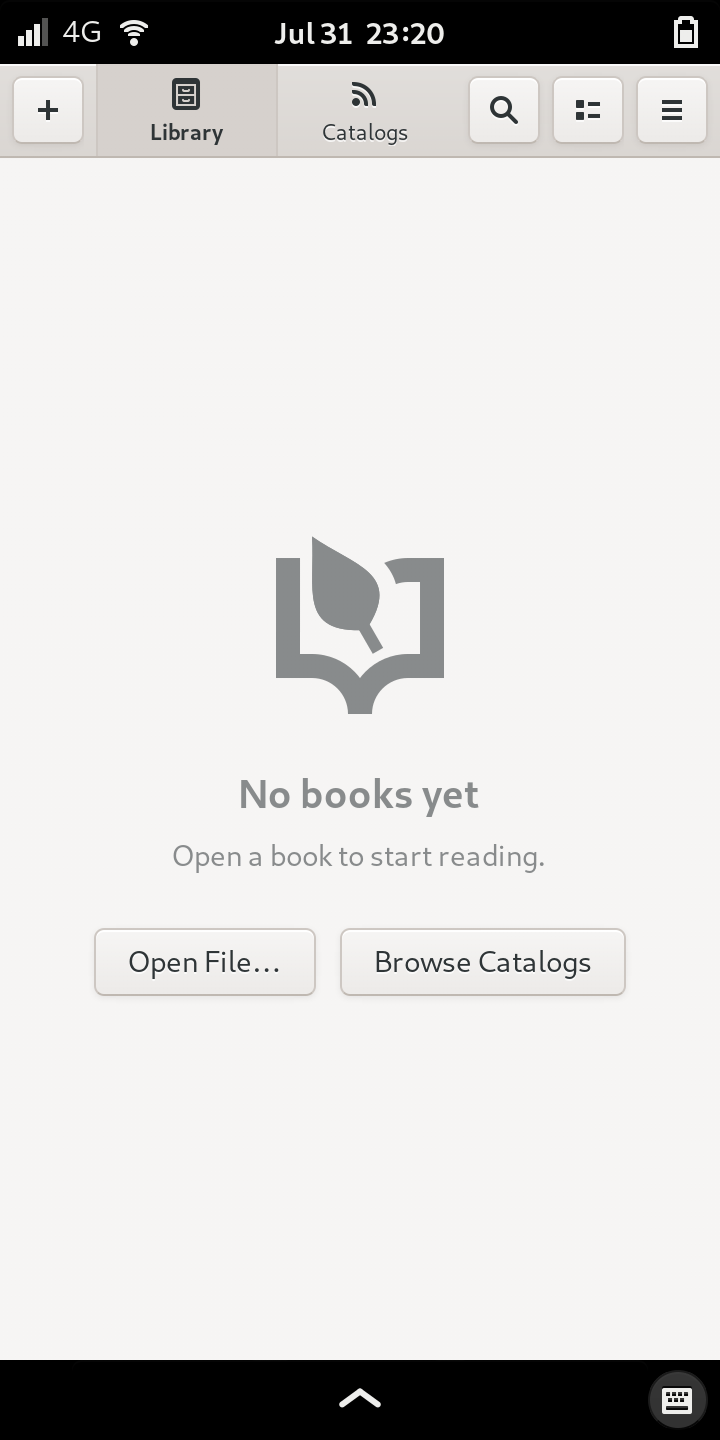 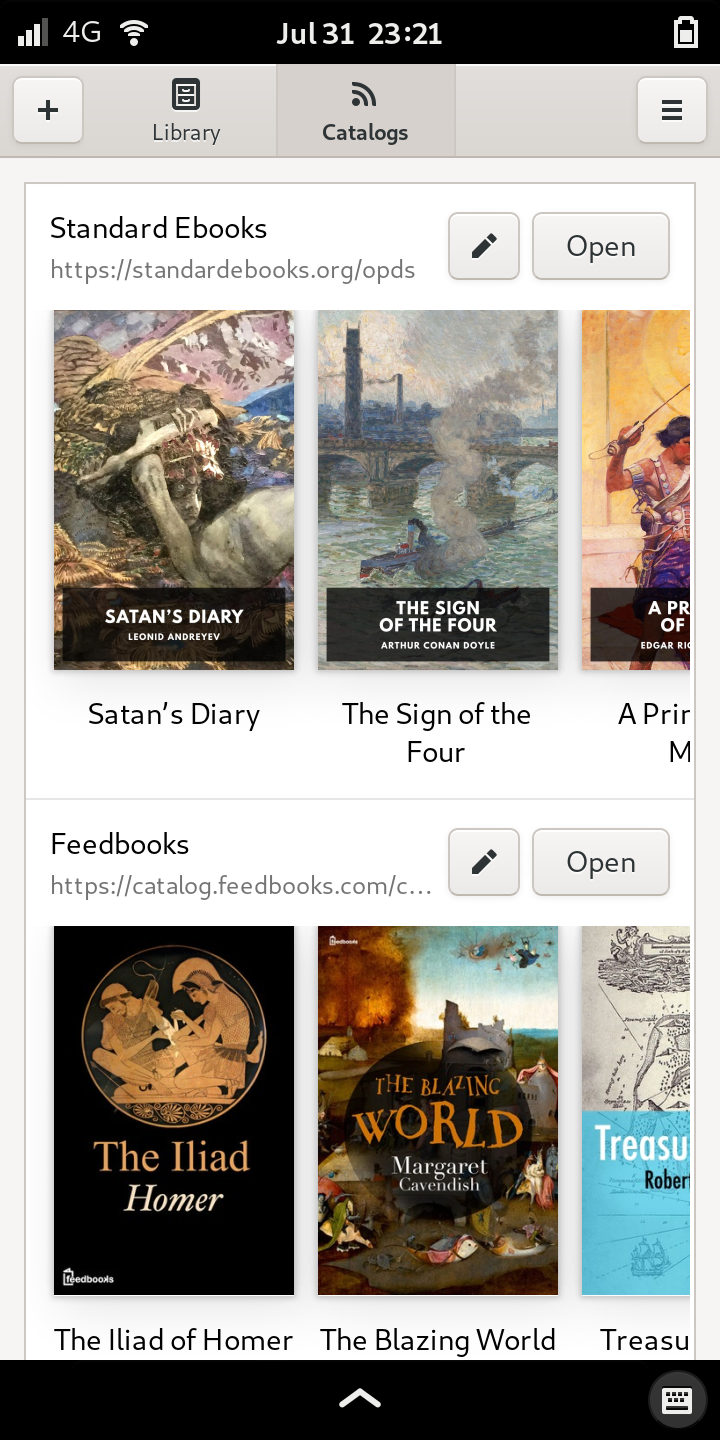 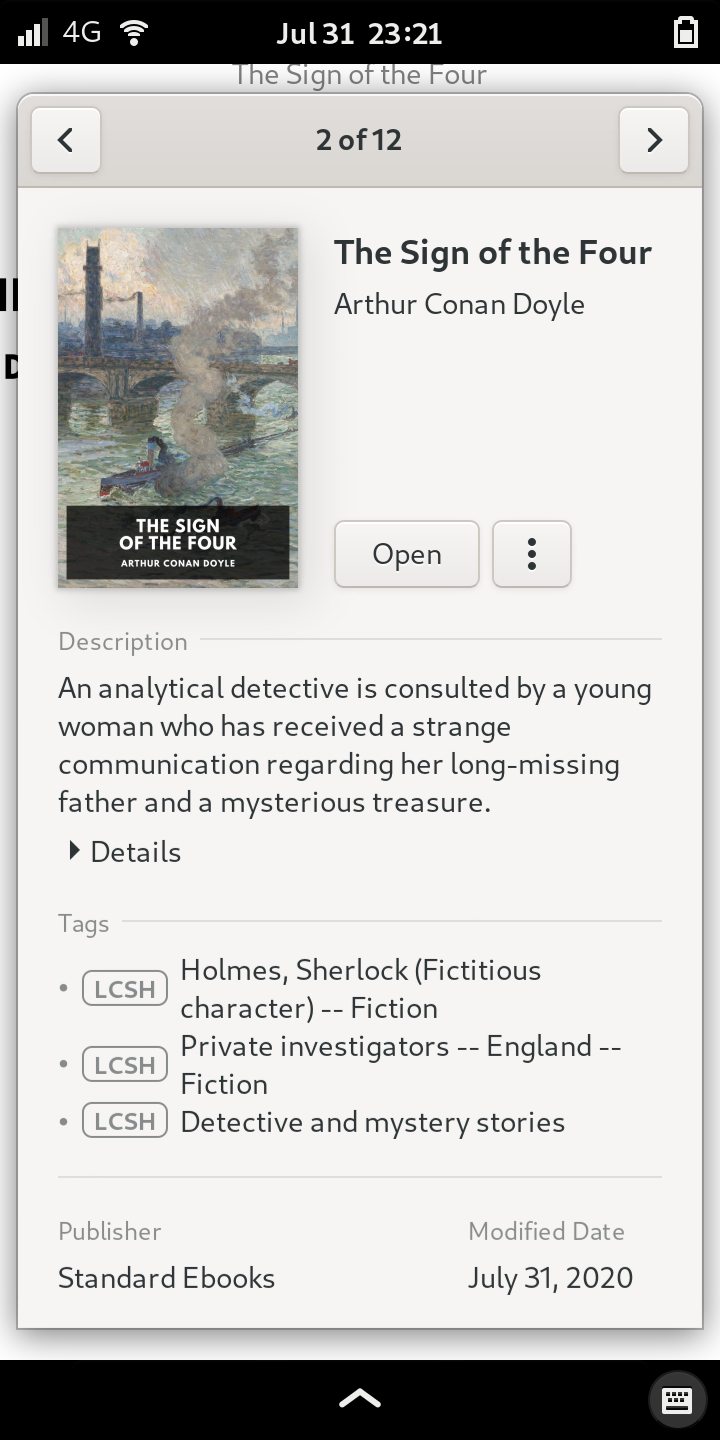 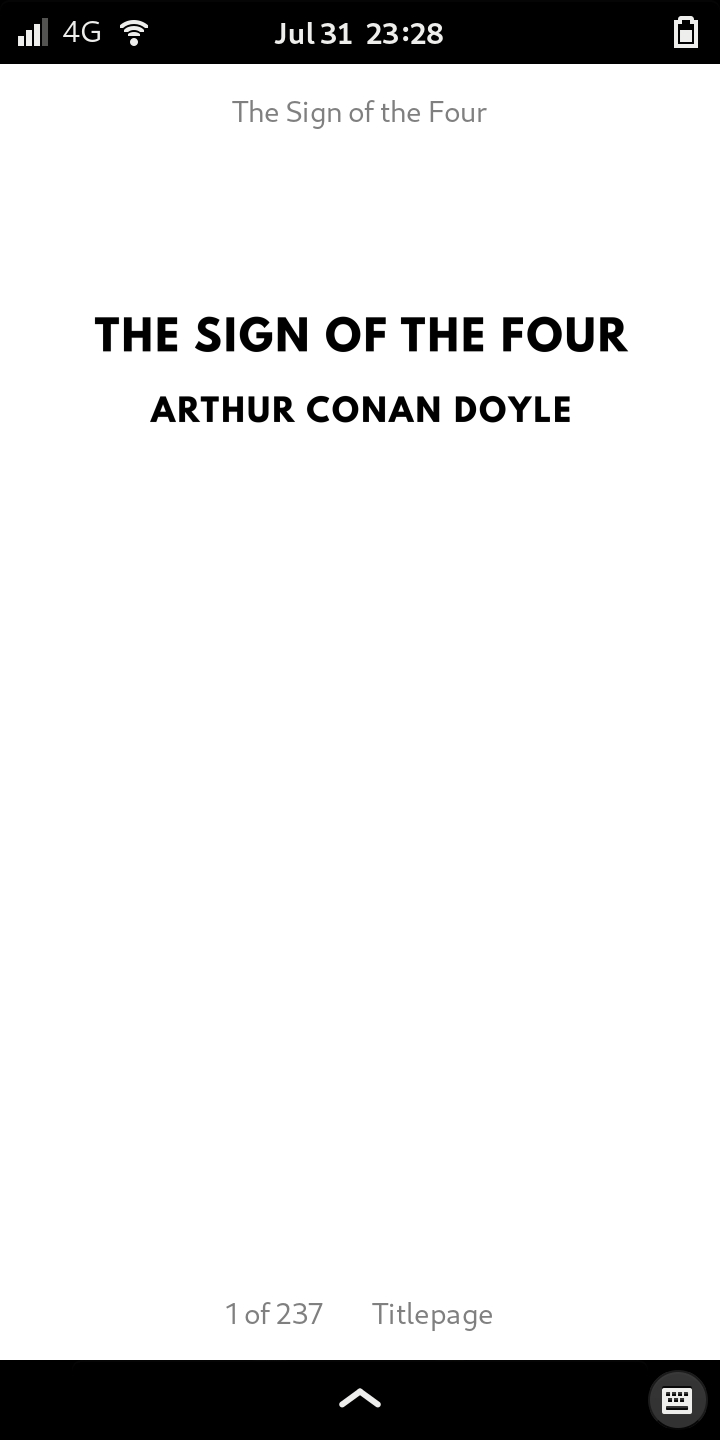 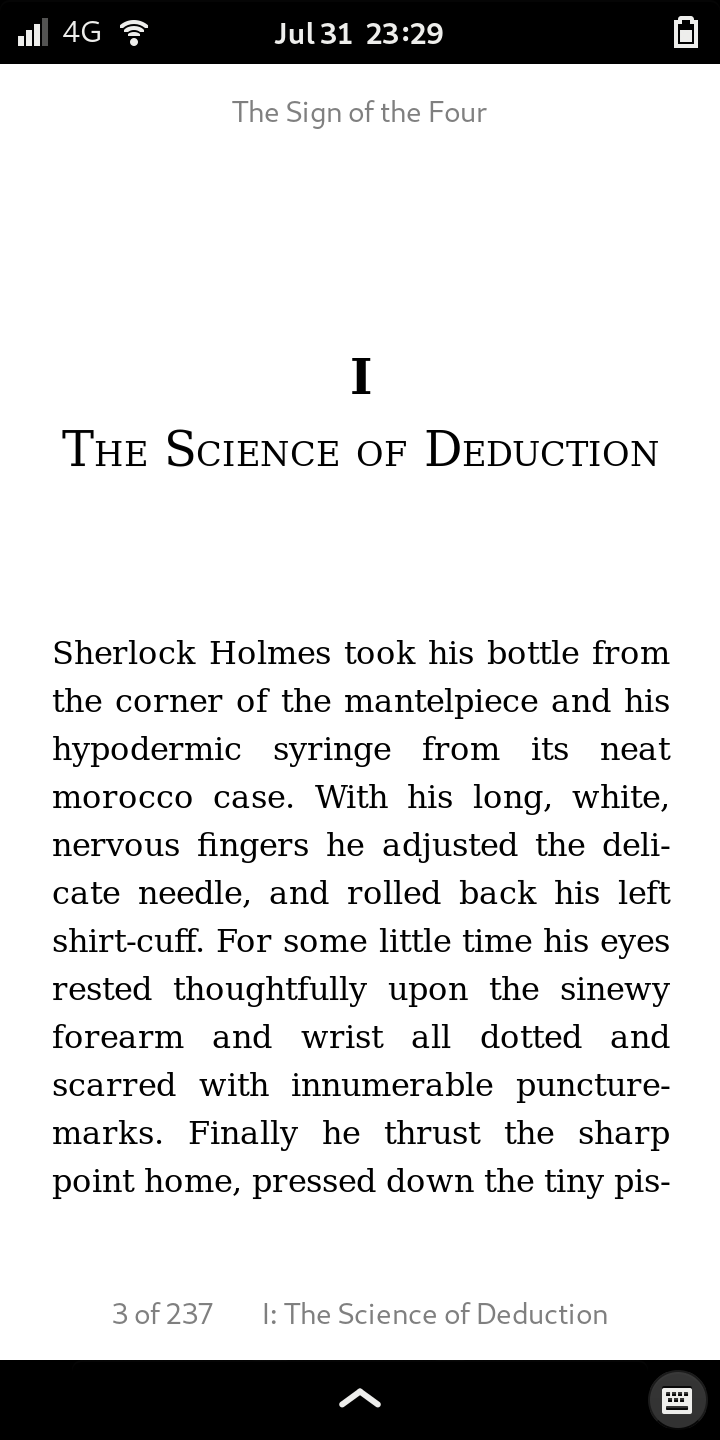 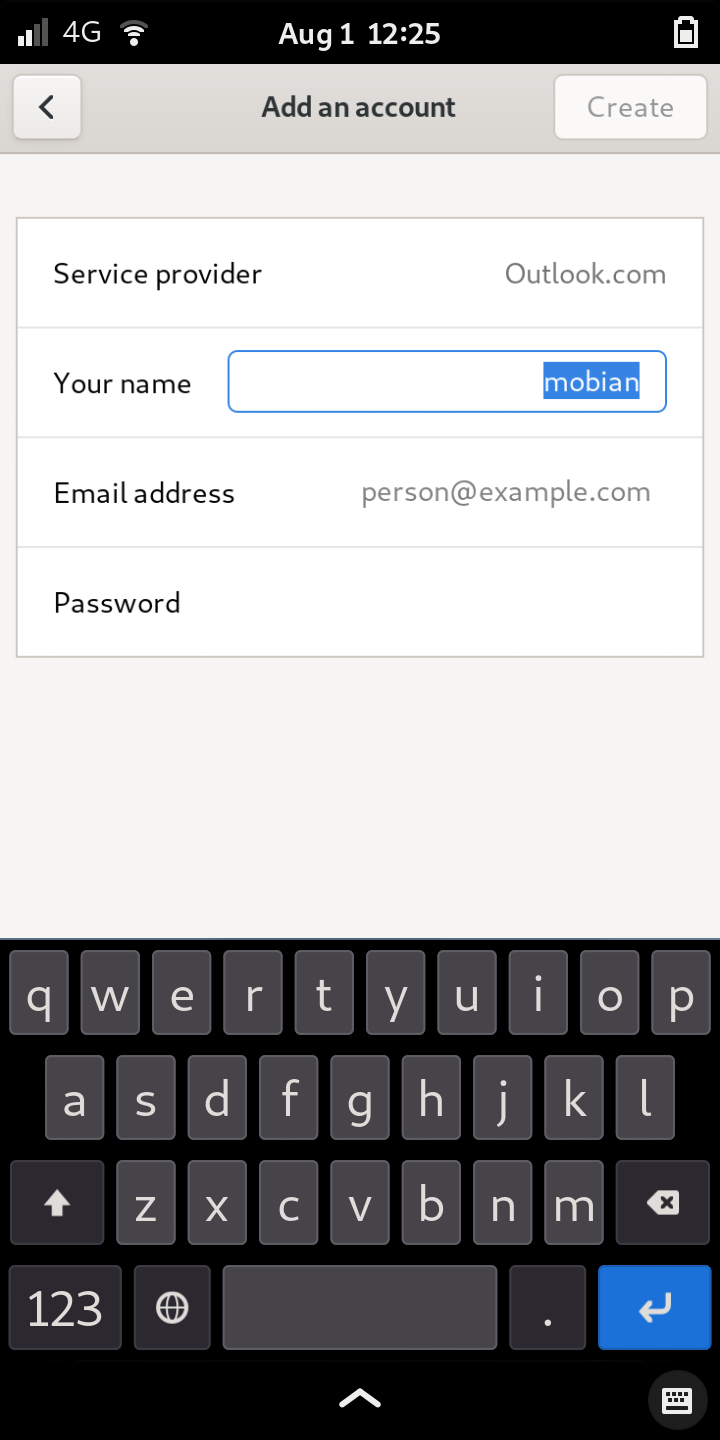 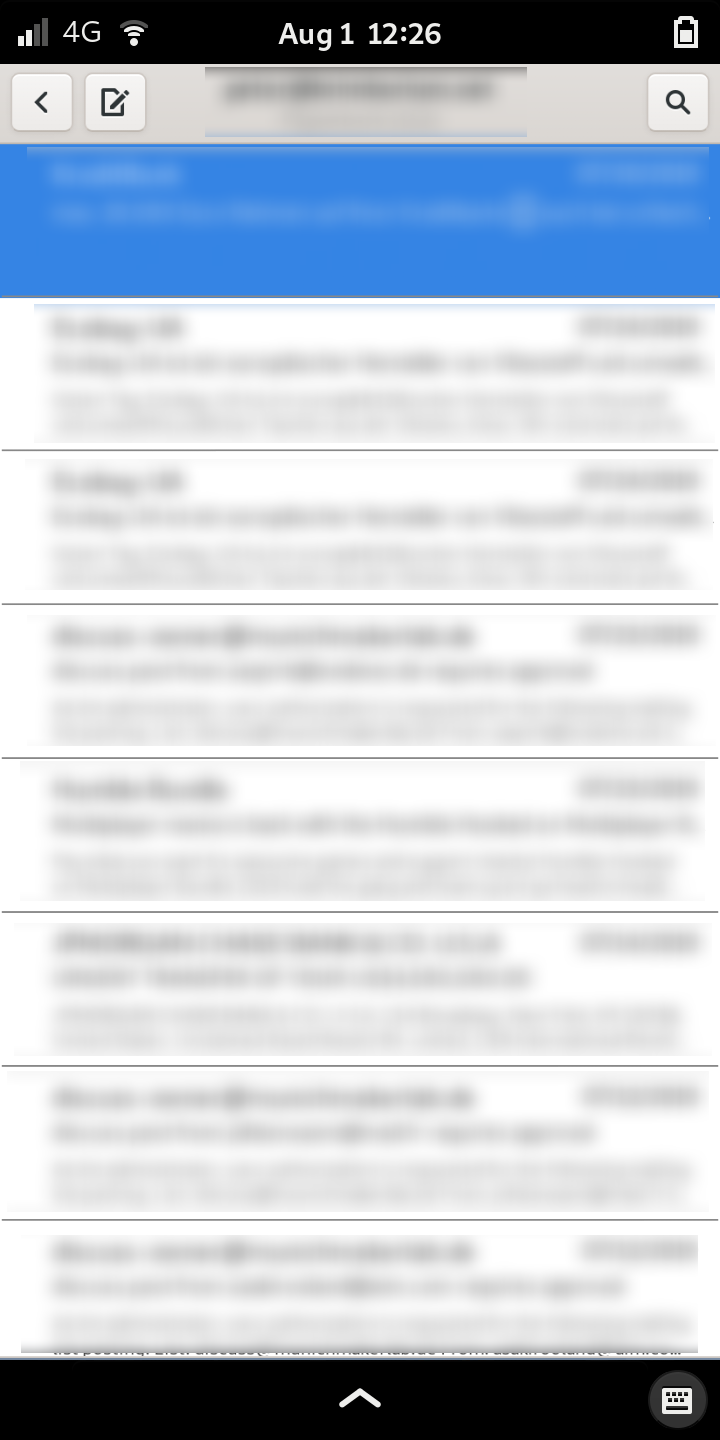 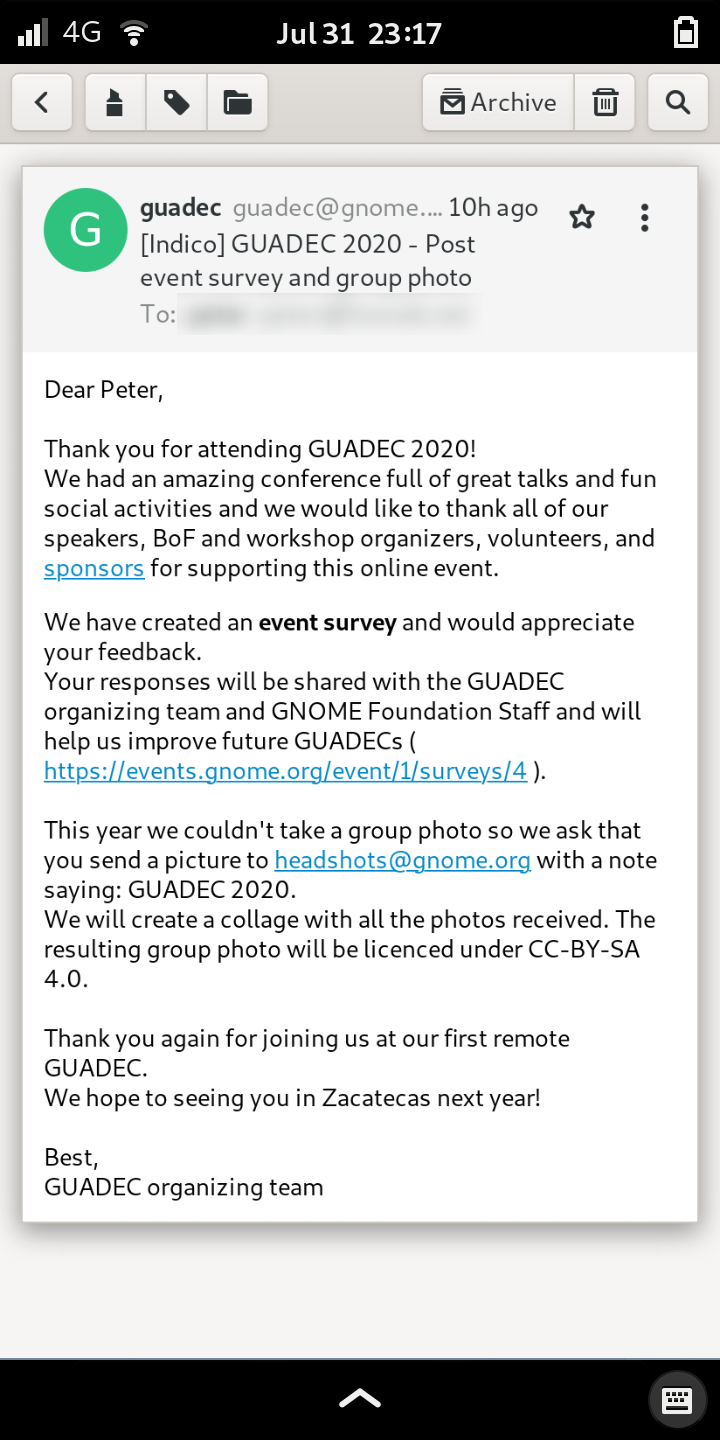 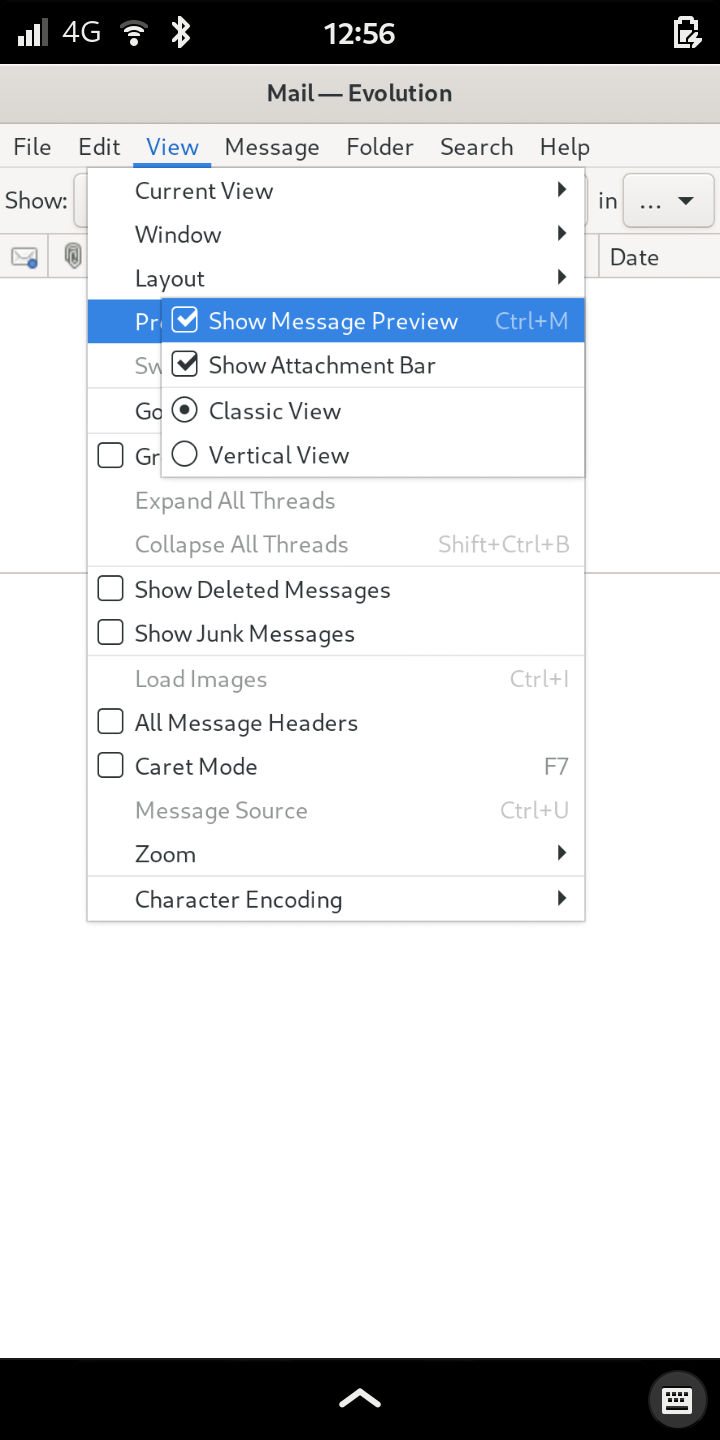 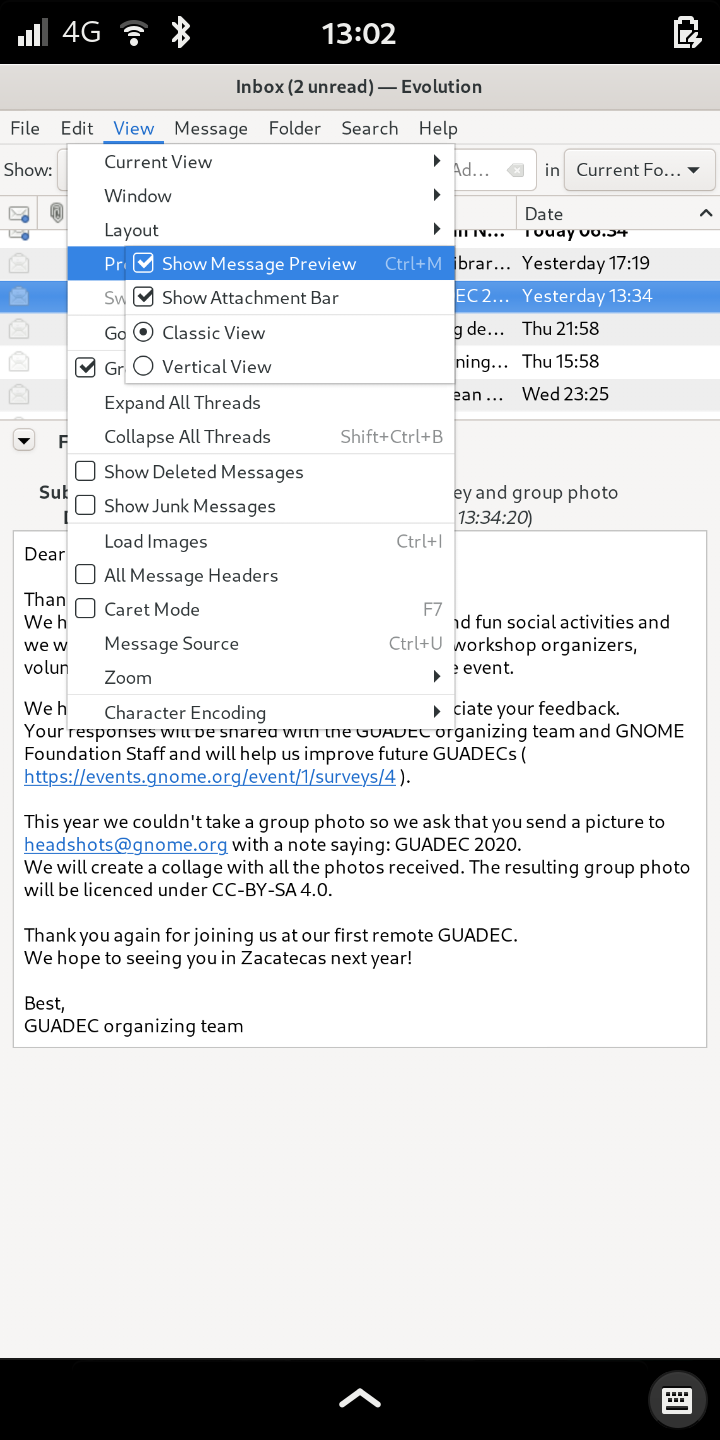 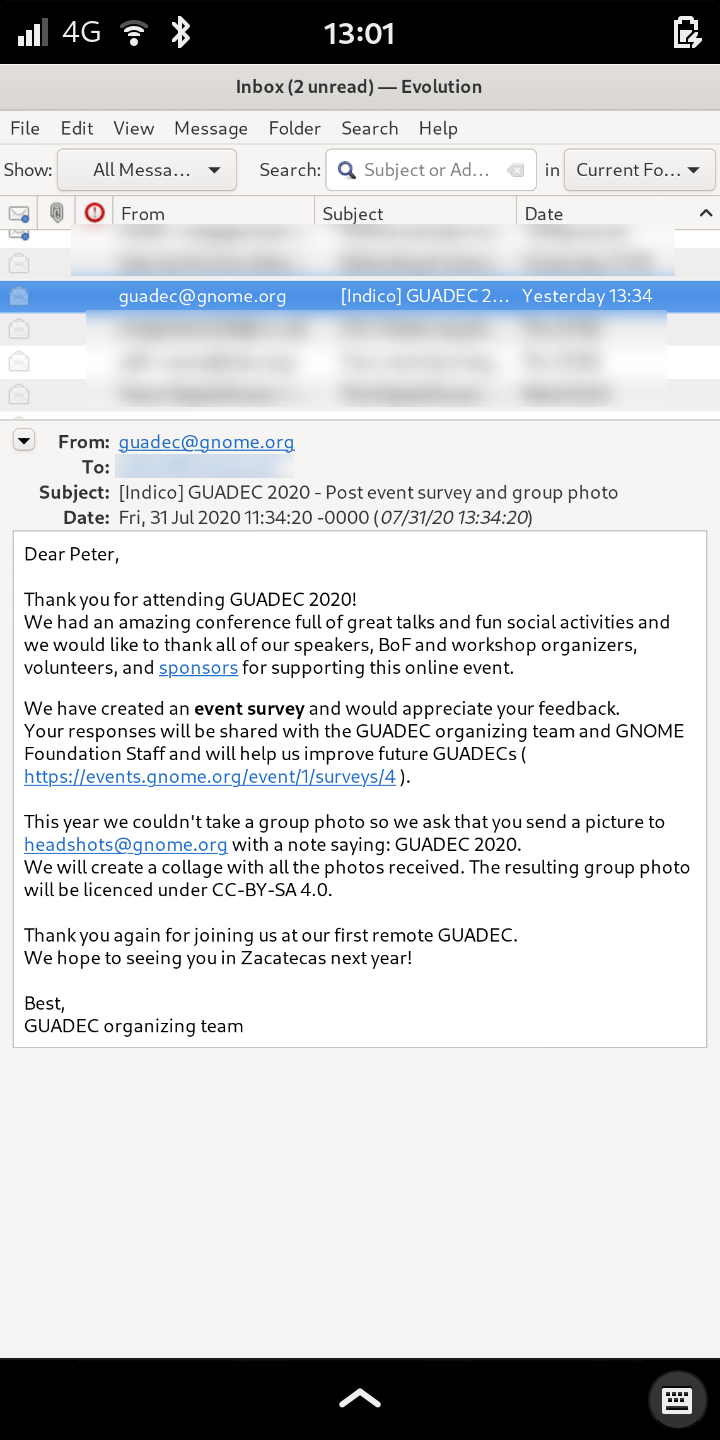